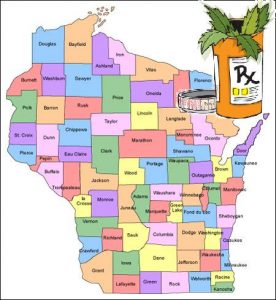 Currently pending in the Wisconsin Legislature is the Jacki Rickert Medical Marijuana Act (JRMMA), the approval of which would allow the use and growth of cannabis for the treatment of certain illnesses.

On Tuesday of this week, the Wisconsin branch of NORML, along with another advocacy group, Is my Medicine Legal YET (IMMLY), held a Day of Pray for Compassion ceremony on the Capitol steps.  The protesters sent a pray to the heavens and, just to be on the safe side, to the Wisconsin Legislature as well, asking for the right to use the healing powers of marijuana.

Speakers at the event included Gary Storck, president of Wisconsin NORML and spokesperson for IMMLY, veterans suffering from post-traumatic stress disorder, an Ojibwa Indian performer and others who have diseases for which they say medicinal cannabis is the best option.

Commenting on the protest, James Cleary, associate professor at the University of Wisconsin School of Medicine and Public Heath, said that he had already prescribed oral cannabinoids for patients with advanced cancer.  However, he went on to say,  “as an oncologist, I am against approving the smoked version. That is the advantage of the Sativex product at this stage, or a vaporized version (of cannabis).”

Note: Sativex was developed in the GP for the treatment of Multiple Sclerosis.

A vaporized version entails heating the plant material in a vacuum rather than burning it, thereby reducing the intake of irritants and toxins when inhaled.

However, Cleary acknowledged the difficulties with Sativex or other oral methods of taking cannabis due to solubility issues.

The legislative issue state and nationwide

The bill JRMMA, authored by Rep. Mark Pocan, D-Madison, and Senator Jon Erpenbach, D-Waunakee, would offer a medical necessity legal defense for those who are prescribed marijuana for treatment. This means patients holding or growing marijuana would be protected from arrest and prosecution.

JRMMA would also establish a licensing and registry system under the Wisconsin Department of Health Services. DHS would also be given the power to designate which diseases would qualify for the use of medicinal cannabis.

The future of medicinal cannabis in Wisconsin

Senator Erpenbach’s spokesperson said it is difficult to tell at this point whether the bill will make it out of the Senate and Assembly health committees and to the floor votes before the end of this legislative session in May.

“I think advocates are working with the committee to iron out concerns,” she said. “There’s a possibility to move it to the floor, but it is a diverse committee that has concerns, and they need to be addressed before a (committee) vote.”

Accordingly, Erpenbach does not want to hold a vote until there is more confidence the bill will pass through the committee.

Senate health committee member Mary Lazich, R-New Berlin, said a lot of what she has been hearing in committee is that medicinal cannabis is used more for relaxation and comfort than for pain relief.

Lazich also pointed to the fact that the medical community — in particular the Wisconsin Medical Society — does not think medicinal cannabis is more useful than current drugs on the market. She added she supports the idea of more research on the effects of medicinal cannabis.

“When the Food and Drug Administration reach a point that it should be legalized and go through a pharmacy with a prescription … then it will be acceptable, but until there’s a legal prescription with legal pharmacy — same as other drugs — I don’t support it,” Lazich said.

Lazich added the other states that have legalized medicinal cannabis for growth in “pot houses” have had a lot of crime associated with those facilities, and she did not want something similar in Wisconsin.

According to Laundrie, if the bill does not get voted out of committee, it will need to be reevaluated and reintroduced in the next session. She added she is not sure Erpenbach will be part of the reintroduction but emphasized Erpenbach has not changed his position on the issue.

Storck said the timing for legalizing medicinal cannabis is perfect right now, as the Democrats hold the majority in both the Assembly and the Senate, and Gov. Jim Doyle has vocalized support for medicinal cannabis.

He added he was concerned about what would happen if the bill has to be reintroduced next session, as the Republicans may reclaim the majority and there will be a new governor.

“No medical marijuana bill has progressed this far, and now we have a governor willing to sign it. The problem is that Republicans need to support it and we can’t quite get them all,” Storck said. “We’re waiting for them to understand this is not a partisan issue and affects everyone.”