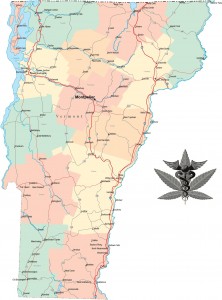 Cannabis for medical use in Vermont became legal on July 1, 2004 under the auspices of  Section 1 Chapter 18 of the Vermont Statutes Online V.S.A: “Act Relating to Marijuana Use by Persons with Severe Illness”

The law removes state-level criminal penalties on the use and possession of marijuana by patients who have in their possession a valid registration card.

Conditions Approved for Use of Medical Marijuana in Vermont

No more than two mature marijuana plants, seven immature plants, and two ounces of usable marijuana may be collectively possessed between the registered patient and the patient’s registered caregiver.

Registration with the Vermont Marijuana Registry is mandatory.

There is a $50 non-refundable fee for each application. There are no provisions to waive the fee, pay the fee in installments, or pay the fee with a credit card. The fee must accompany each new or renewal application.

Registration cards from other US states are not recognized.

2nd June, 2011 – Good news, a bill has been signed which now allows 4 legal medical marijuana dispensaries to be set up in Vermont.

Please contact us if you know of any marijuana doctors or dispensaries in Vermont.

Full details of how to get a medical marijuana card in Vermont.