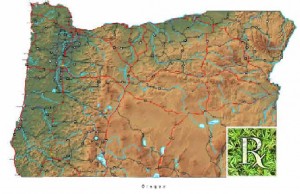 Cannabis for medical use in Oregon was approved via Ballot Measure 67 by 55% of voters on Nov. 3, 1998, finally becoming effective on December 3, 1998

The law removes state-level criminal penalties on the use, possession and cultivation of marijuana by patients who possess a signed recommendation from their physician stating that marijuana “may mitigate” his or her debilitating symptoms.

Patients (or their caregivers) may only cultivate marijuana in one location, and requires that patients must be diagnosed by their physicians at least 12 months prior to an arrest in order to present an “affirmative defense.” This bill also states that law enforcement officials who seize marijuana from a patient pending trial do not have to keep those plants alive.

There have been numerous updates and amendments, however you will find the most up to date information Oregon Administrative Rules, Division 8, Medical Marijuana. This document is dated December 15, 2009.

Conditions Approved for Use of Medical Marijuana in Oregon

Full details of how to get a medical marijuana card in Oregon.

Will Medical Marijuana be legalized over 50 states?

Will Medical Marijuana be legalized over 50 states?