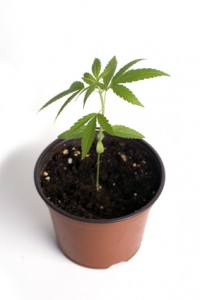 The 1936 propaganda film “Reefer Madness” theorized that smoking cannabis would drive the American public to the brink of insanity. If you haven’t seen Reefer Madness, it’s available online for Netflix and Amazon Prime members, or you can watch it on demand, according to Direct2TV.com. The movie offers an exaggerated—and unintentionally humorous—look at the perils of smoking pot. Times have certainly changed. A majority of Americans believe marijuana should be legalized for recreational use. Two states, Colorado and Washington, have completely decriminalized cannabis. In other words, it’s legal to smoke recreationally in Colorado and Washington. The Federal Controlled Substances Act remains unchanged though — affecting individuals with prescriptions, dispensary owners and people who smoke recreationally even in the aforementioned states.

Only Colorado and Washington have gone the full distance to completely decriminalized marijuana. This means any adult can have the plant (up to a statutory limit) without breaking state laws. Currently 20 states and the District of Columbia have laws governing the use of medical marijuana, according to the National Conference of State Legislatures.

The growing number of medical uses for marijuana partially follows behind the growing support for legalization. A 2010 study by the Journal of Clinical Nursing highlighted potential benefits of pharmaceutical grade THC, the active ingredient in marijuana, for palliative care. Regular smoking of cannabis can prevent the onset of Alzheimer’s disease. Cannabis is also known to treat glaucoma and the symptoms associated with various cancer treatments.

It has been a marijuana roller coaster ride for some states. Michigan, for instance, has statutory discrepancies between municipalities and the state. Ann Arbor and Grand Rapids allow possession of a small amount of cannabis, treating it solely as a fineable offensive. State law is more stringent. Ann Arbor authorities permit individuals to walk down the street carrying a small amount of weed, but if you go onto the University of Michigan campus, expect state law and harsher penalties.

Colorado started out with Amendment 44 in 2006, which would have allowed adults to possess one ounce on cannabis penalty-free. The voting population rejected that bill, and fully decriminalized usage six years later.

California has gone round and round on the subject since 1972. California’s Proposition 19 would have legalized usage and allowed local governments to tax the sale of cannabis. State voters rejected that plan in 2010.

The federal government declares that marijuana use, whether recreational or medical, is illegal – period. No matter what city or state law says, the Justice Department categorizes cannabis as a Schedule 1 controlled substance with no medical benefits. The Whitehouse website even states there is currently no legal or acceptable use for marijuana. So keep in mind federal law enforcement agents can arrest people who have prescriptions for medical marijuana or recreational users in Colorado or Washington. Montana, however, has passed laws that allow local sheriffs to arrest federal agents who impede on state sovereignty.

Marijuana legalization remains a hot topic for debate. If you stand on the side of Washington and Colorado, then go ahead and keep celebrating and supporting the cause with a night of watching “Pineapple Express,” “Dazed and Confused” and “Harold and Kumar go to White Castle.”