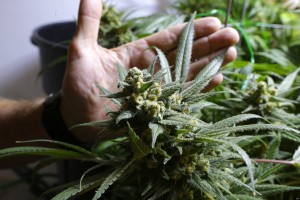 Brent Miller poses for a photo with marijuana plants ready to harvest in one of the grow rooms of his medical marijuana grow operation, Thursday, May 16, 2013, in Seattle. Officials in Washington state released a draft set of rules for the states new marijuana industry Thursday, nearly eight months after voters here legalized pot for adults. (AP Photo/Ted S. Warren)