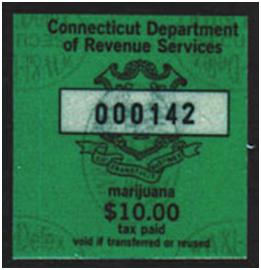 
Cultivation, Delivery or Sale of Cannabis

Conviction of any violation involving marijuana allows the court to recommend to the licensing boards within the state that the offender’s license to practice or carry on his profession be suspended or revoked.


Despite such harsh cannabis-related penalties, or maybe because the penalties are so harsh, medical marijuana has been long debated within Connecticut and, over recent years a number of ‘official’ bodies, including the Connecticut State Nurses Association and the Connecticut legislature, have come out in support of ‘safe access to therapeutic marijuana.’


In 2009, SB 349 was referred to the Joint Committee on Judiciary; if passed, the Bill would see the reclassification 1oz of marijuana or less from misdemeanor to infraction. Adults found to be in possession of one ounce of less of marijuana would be issued with tickets and assessed a nominal fine in lieu of criminal charges.


The bill was introduced by Senator Martin Looney and Senator Toni Harp; Senator Looney said he believed introduction of the Bill would save the state $11 million a year in law enforcement costs. At the same time, HB 6156, which called for protection from arrest and imprisonment for those with serious medical conditions who used marijuana to gain relief from pain and distress, was also introduced to the Judiciary.


However, just as she had in 2007, Governor Jodi Rell opposed to the decriminalization of marijuana. The word ‘veto’ was studiously avoided, but aides of the Governor said, “”The governor opposes illegal drug use and possession, whether it’s a little or a lot, marijuana is an illegal drug.”


Then, on November 2 this year, Governor Rell ceased to be a factor in Connecticut’s pro-medical marijuana debate; Dannel P. Malloy became the first Democrat to capture the governor’s office since 1986. And, even better news, Malloy has stated publicly that not only does he “support medical marijuana,” but also that he believes “possession of marijuana in small amounts should be decriminalized.”


With Governor Malloy due to take office in January, the outlook for medical marijuana patients in Connecticut is looking hopeful for 2011.