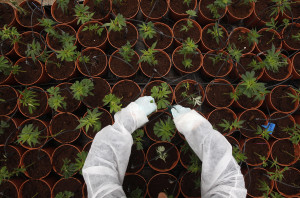 A worker tends to cannabis plants at a plantation near the northern Israeli city of Safed June 11, 2012. It is here, at a medical marijuana plantation atop the hills of the Galilee, where researchers say they have developed marijuana that can be used to ease the symptoms of some ailments without getting patients high. Picture taken June 11, 2012. REUTERS/Baz Ratner (ISRAEL – Tags: HEALTH DRUGS SOCIETY TPX IMAGES OF THE DAY) – RTR34J7Q