Is Skin Color the Basis for Medical Weed Prosecution? 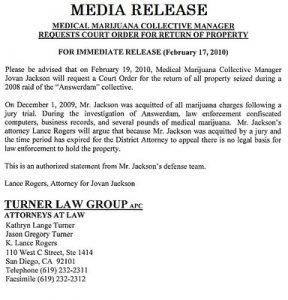 Jovan Jackson of San Diego is a medical cannabis patient and a navy veteran.  He is also the manager of San Diego marijuana collective, Answerdam.  In December of last year, Mr Jackson was acquitted of the charge of possessing marijuana and selling the drug for profit.  During the investigations which led up to that trial, law enforcement officers confiscated computers and business records; they also seized several pounds of medical cannabis.  The DA’s time to lodge an appeal has now expired and Mr Jackson wants his stuff back.

Jackson’s attorney, Mr Lance Rogers, will today argue for the return of his client’s property.

December’s trial was related to federal raids that took place in August 2008 and Mr Jackson was vindicated on all five medical marijuana related charges; in fact, the prosecutor for the case, Chris Lindbergh, was rebuked by the jury for taking the case to trial.

Mr Jackson’s premises were raided again on September 9, 2009 but charges related to this raid have not yet come to litigation. The preliminary hearing for these charges is set for February 26, 2010 and Mr Rogers will argue for a dismissal based on prosecutorial discrimination; otherwise known as a Murgia Motion.

On February 9, 2010 Lance Rogers was able to clearly show that Jovan is a victim of Double Jeopardy and that the circumstances and all details of the investigation were the same in both raids. The judge explained that because the second raid was on a different date, there was no case law supporting this as double jeopardy, and therefore denied the motion.

The motion will show how Mr. Jackson was deliberately singled out for prosecution on the basis of his race. The Cross Jurisdictional Narcotics Task Force (NTF) has been investigating Mr. Jackson for two years, during which at least ten non-black suspects actively involved in the possession, sales, distribution, and transportation of marijuana were also investigated, yet no charges were brought forward nor any other suspects prosecuted.

If you are in the San Diego area today or on February 26 and wish to support Mr Jackson in this process you can go to the Courthouse.  Today’s case takes place in Department 33 at 08.30.