White Rhino, a close relative of White Widow, is both pungent and potent and is an excellent marijuana plant for medicinal use. It takes it’s name from the distinctive rhinoceros horn shape at the top of the plant and its whiteness.

White Rhino marijuana seeds produce weed with very dense buds that carry an astonishing amount of crystals – it looks like the flowers are covered in frost! The aroma has been variously described as: overwhelming; spicy anise; baby poo; sour; peppery. Despite the ‘baby poo’ description, the taste on inhale is sweet and tangy with a hint of Haribo Sour Mix; it’s on the exhale you get the peppery, anise taste, which leaves your tongue and lips a bit on the numb-side.


White Rhino is probably the best weed for controlling severe pain out there. 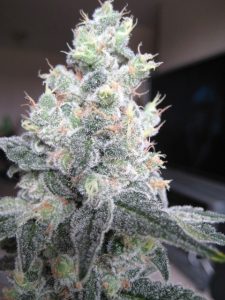 White Rhino at a Glance


White Rhino is recommended for: