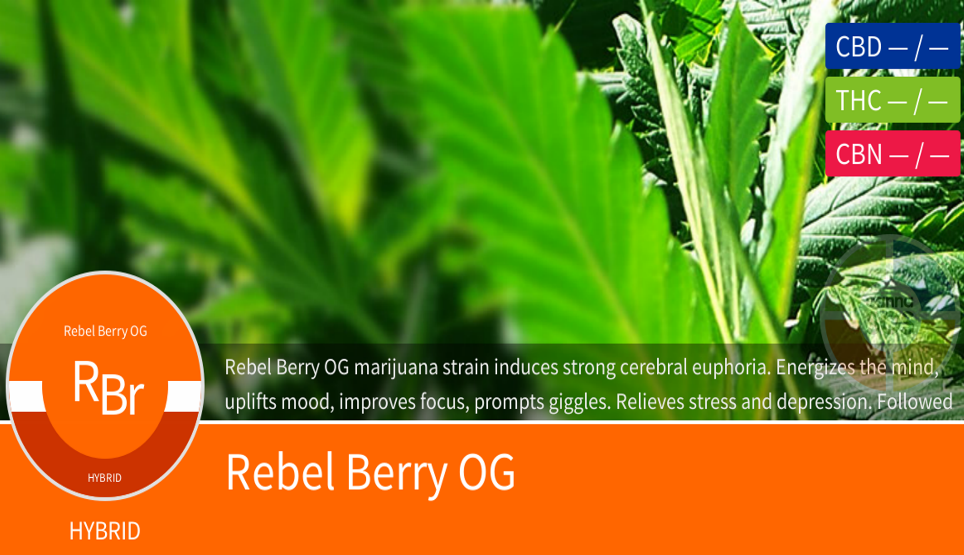 Rebel berry is a sativa dominant hybrid with as high as 70% sativa and only 3% of indica. Although its parentage is unknown, Rebel Berry OG has been linked to the OG Kush family. This award winner of the best outdoor at the 2016 Oregon Growers Cup was created by Kotton and mainly bred for potency and its ability to stimulate creativity. It has a concentration of up to 15% THC which gives off slight psychoactive effects such as sedation.

The ease of growing Rebel Berry OG has made it very popular among users in addition to its all-around euphoric high. Within 8-9 weeks, the plant flowers and gives off dark olive green conical nugs with bright amber hairs and a coating of bright white crystal trichomes.

When it comes to sex setting, Rebel Berry OG is feminized. Given the ease of growing this particular cannabis strain, it has been found to grow well both indoors and outdoors with a height ranging from medium to tall.

Rebel Berry OG has a strong aroma of berries with a hint of citrus, spice, vanilla and beautiful juniper and fresh crisp apple mixed in. when lit up the nugs taste like a fresh piece of blueberry cheesecake and citrus.

Contrary to its name, Rebel Berry OG cannabis strain’s effects are happy and full of laughter, leaving the consumer buzzling with euphoria. The strain first hits you with an energetic lift that hits you hard between the eyes, leaving you feeling silly and lightheaded.

As this effect grows, you will feel an influx of creative inspiration and a sudden feeling of arousal. It also energizes the mind, uplifts mood, improves focus and prompts giggles.

This relaxing effects weighs heavily on the eyes and completely takes away all the stress. It has been advised for use during day and morning times as it keeps you relaxed but at the same time awake and active including creativity.

Although it is psychoactive, THC has been found to be one of the biggest contributors of the therapeutic capabilities of cannabis as a whole. The availability of medium THC in Rebel Berry OG marijuana strain makes it one of the many cannabis strains worth discussing when it comes to medical cannabis.

Given its ability to induce strong cerebral euphoria, Rebel Berry OG is often chosen to treat conditions such as chronic depression, headaches, cramps, glaucoma, and appetite loss. Research has found THC to be a great reliever of pain in addition to it stimulating hunger hence a solution for patients with appetite loss. Other conditions treatable with Rebel Berry OG are stress, insomnia and depression.

Rebel Berry OG does not make you a rebel but rather a creative and relaxed happy user. Its ability to provide a solution to several health conditions and other side effects makes it a subject worth doing more research on. With the move to legalize marijuana in the US still underway, our hopes remain high.