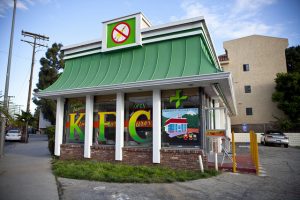 We all know that medical marijuana is not exactly breaking news in California. In fact, medical marijuana dispensaries are popping all over the place. However, amidst all this serious business of legalization and regulation, sometimes its good to take a break and see how innovative and funny a dispensary can be. Such is the case with the Kind For Cures dispensary, which was opened on the premises of a former Kentucky Fried Chicken establishment. Not only did they keep the initials (KFC – Kind For Cures) but they also decided to improve their product line based on some of KFC’s original products.

The dispensary is located in the Palms neighborhood in Los Angeles and it opened in 2009. Needless to say, their decision to keep the initials has gained a lot of media attention and continues to do so because of their funny attitude. In fact, the dispensary was even featured in an episode of South Park in 2010. However, Kind For Cures is not only known for self-promotion. KFC is a dispensary that runs things by the book. For instance, this particular dispensary strictly adheres to the guidelines of the California Proposition 215, which was passed in 1996. The owners of the dispensary also make sure that the California Senate Bill 420, which was passed in 2004, is considered the dispensary’s Bible.

In order to obtain your own portion of medical marijuana at Kind For Cures, you need to have a valid California ID card and a recommendation from a valid California physician. It is vital to say that without that, you couldn’t even come close to those sweet indicas, sativas and hybrids they have in store. Some interesting edibles, beverages and tinctures are also available for medical marijuana patients.

Obviously, the KFC connection has to stop somewhere so they were smart enough not to user their logo and because of that, they surely avoided a hefty lawsuit. However, they are quite innovative about their product line. For instance, in terms of edibles, you can get a “Royal Highness” pretzel for a decent price. Plus, a “Blackout” brownie is also a sweet recommendation if you happen to be in the neighborhood. Of course, the Kentucky Fried Chicken also features the famous chocolate chip cookie and the dispensary is already on its own version of that particular product. Currently they are inspired by the original KFC’s Colonel Sanders and are thinking about creating a Captain Cheech. Instead of zip lock bags, they are thinking of selling little portions of weed in small buckets. We think that’s hilarious.