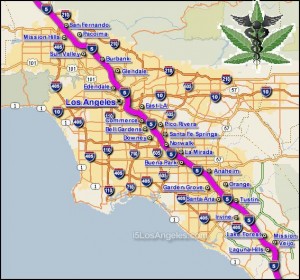 In a 9-3 vote this week, Los Angeles City Council, approved an ordinance that will see the closure of hundreds of medical marijuana dispensaries.  Those dispensaries that are still allowed will see the imposition of strict rules as to the way they operate and where they are located.

This ordinance first saw the light of day four-and-a-half years age and this week’s vote saw it finally approved.   The number of allowable dispensaries will be capped at 70, although those dispensaries registered in 2007 will be allowed to remain open.  The estimate is that this will mean there are a total of 150 dispensaries in the city.

Currently, according to LA city officials, there are in excess of 500 dispensaries that the ordinance will force to close; some of these are already preparing to take legal action against the city by collecting signatures.

The new ordinance will also require at least 1,000 feet between dispensaries and that any dispensary is at least that distance from schools, parks and libraries – the so-called sensitive uses.  Other restrictions will see the dispensaries tied to an 8pm close and prohibited from allowing marijuana use within the store.