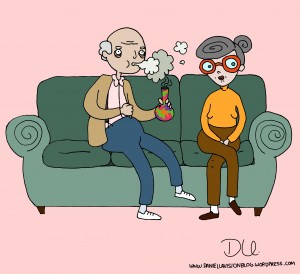 It’s been known, anecdotally at least, for many years that cannabis can help ease the painful symptoms of rheumatoid arthritis. Well, it stands to reason doesn’t it, considering that marijuana was frequently used for pain management back in the 19th century. And today a growing number of medical professionals are calling for weed’s reinstatement into the national pharmacopoeia. In America alone there are well over 30 million people suffering from arthritis, both rheumatoid and osteo. Osteo-arthritis is generally a factor of aging, when the cartilage is worn down with use resulting in stiff and painful joints. Rheumatoid arthritis can occur at any age and is brought about when the body attacks itself, in this case the synovial membranes, due to a malfunction of the immune system. There are other types of arthritis, most of them an aspect of immune system diseases, but rheumatoid and osteo that are the major culprits in the west’s arthritis epidemic.


We recommend CBD oil for treating arthritis as it helps with inflammation and does not get the patient high.

Now, let’s go back to that earlier comment about rheumatoid arthritis and other, less common, arthritic diseases being caused by a faulty immune system – this is important because: cannabis has also been shown to have powerful immune-modulation and anti-inflammatory properties. This means that not only could cannabis ease the pain of arthritis, it could also play a role in treating the causes of arthritis. As far back as 2000 BC, the Chinese were reporting that cannabis ‘undoes rheumatism.’


Nowadays, we know that it is the cannabidiol within marijuana – one of the many non-psychoactive components within it – that suppresses the immune system. Well, it certainly did in a group of rats and mice back in 2004. A study undertaken to see if cannabis would reduce artificially induced inflammation in rats’ paws found their condition remarkably improved after the administration of cannabis. Further severe damage to their joints was also prevented.


In human subjects, cannabis has also been shown to improve mobility and to reduce morning stiffness and inflammation, with cannabis using patients able to reduce their usage of prescribed drugs. Furthermore, a study at the Hebrew University in Jerusalem discovered that when cannabidiol is broken down by the body it produces a potent anti-inflammatory action which is just as effective as indomethacin (an oft prescribed arthritis mecidine) but without its unpleasant gastrointestinal side effects.


Of other components of marijuana, THC is broken down into a number of chemicals, one of which is known to have both anti-inflammatory and analgesic effects. Researchers in Massachusetts have modified this to produce a synthetic version known as CT-3. In animal testing, CT-3 has been shown to protect against chronic and acute inflammation and prevent the destruction of joint tissues that happens with chronic inflammation.


It is a well-recorded fact that nobody has ever died of a cannabis overdose; yet the NSAIDs taken in ever-increasing dosages by sufferers of painful inflammatory joint conditions can, and do, cause serious side effects and death.

Oh, and here are fifteen things you should never say to somebody with rheumatoid arthritis!