By adminMarch 27, 2010Benefits of Medical Marijuana, Medical Use of Marijuana, Treat Medical Conditions Note:  The following story has been taken from the Pueblo Chieftain, a Southern Colorado newspaper.  As the whole point of the piece is for medical marijuana users to tell their stories, I have copied the piece in full.

The patients interviewed for this story requested their real names not be used for reasons of privacy and because of what they perceive as a stigma regarding the use of marijuana as medicine.

In the aftermath of sudden lower-body paralysis that struck nearly four years ago, Puebloan Jeannie M.  found herself in a wheelchair, and in a drug-induced fog.

After more than three months in the hospital, she was sent home with prescriptions for Dilaudid, Baclofen, antidepressants, anti-convulsants and other medications that require mathematical genius to track correctly, she said.

Because some of the narcotic painkillers made her too drowsy to read or even watch TV, and affected her coordination during physical therapy sessions, the 53-year-old decided to try marijuana as a substitute.

She admits having been a recreational pot user years ago, but had read about the potential benefits of marijuana for patients with multiple sclerosis and other spinal diseases or injuries.  She has transverse myelitis, a severe inflammation of the spine that often is a precursor to MS.

Two of her many doctors agreed that she might benefit from marijuana, and one of them wrote her a prescription for Marinol, a pharmaceutical that contains a synthetic version of THC, one of the components believed to be responsible for marijuana’s medicinal benefits.

She took the drug off and on for a year, and experienced some relief from pain and insomnia, she said.

“I’m on Medicaid.  Sometimes they’d pay for it, and sometimes they wouldn’t, so I wasn’t on it that whole time.  Then they stopped paying for it completely,’ she said.

She got the drug through friends and family members who are recreational marijuana users and found it helped more than Marinol, especially with nerve pain that is comparable to the phantom limb pain experienced by amputees.

She said it also controls “toning” in her leg muscles — involuntary contractions and extensions that are painful and often occur at night, contributing to insomnia that’s been her companion since she became ill.

“I told my doctors I was smoking marijuana and asked them to sign papers for me to get it legally and none of them wanted to do that,” she said.

But they were willing to write letters in support of her wishes, and one of them recommended she go to a Pueblo West medical marijuana dispensary where Dr.  James Satt of Rocky Ford evaluates and certifies paperwork for medical marijuana registry applicants.

Satt went over her medical records and signed her evaluation form and in December, she joined nearly 300 Puebloans who are on the state’s registry.

Then came the shocker: The cost of an ounce of marijuana at the dispensary was $375, compared with an average of $175 to $200 for what she said is a comparable product bought illegally.

“They said it’s higher quality, and they had so many different kinds of marijuana I couldn’t believe it,” Jeannie said.  “But I didn’t think it worked any better than what I was buying before.”

So, she’s considering growing her own plants from seed or “clones” available at some dispensaries, or continuing to buy from illegal sellers — with the knowledge that her possession of what she buys is illegal.

“The whole thing is confusing,” she said.  “I feel better having my card to be legal.  But I can’t afford those prices.”

Sheldon has his own business as a construction contractor.  He said he has used marijuana recreationally since high school and learned as a young adult that it did a better job for his back pain than the narcotics doctors urged him to take.

“I don’t do anything else for my back pain, which is pretty excruciating.  And ( marijuana ) helps me sleep at night,” said the 43-year-old.

He disagrees that the higher price he pays at dispensaries isn’t commensurate with higher quality.

“When you get into the higher grade medicinal stuff, it acts almost like a prescription drug but without all the adverse effects of regular narcotics,” he said.

With the sales and production of medicinal marijuana having been legal since 2000, Sheldon said.  Growers have had ample time to experiment with quality and purity, as well as specializing various strains to target various symptoms.

“Some are good for relaxing, some for pain, and some for sleep.  They have different medical effects, just like different pills.  There are 25 or more marijuana strains, and they’re not all alike.”

Sheldon said he doesn’t mind the increased cost because what he buys at dispensaries, or sometimes from a certified grower at a discount, is more effective for his pain.

He smokes about an ounce a month, sometimes an ounce and a quarter, he said.

He became a certified registry patient in December, in part so he could grow his own marijuana without fear.

He was evaluated by a doctor in Colorado Springs who “was adamant that she wouldn’t give me anything without my medical records,” he said.  “She had the foresight that she wanted to have the records to prove that she was doing things right.

“She wants to see me once a year.  I think a lot of people might not be legal after the law changes, when it comes to passing the true test ( for medical need ).  They should start making ( exams mandatory ) every single year and have the same doctor, or another legitimate doctor, issue new certifications,” he said.

Sheldon said he never had a legal problem with marijuana before he decided to get licensed in December.

“I wanted to start growing my own.  That’s the biggest reason.  I’ve been a recreational pot smoker most of my life.  I don’t drink, I don’t do any other drugs.  I don’t get high at work.  Just a little after I get home, and sometimes before I go to bed,” he said.

Sheldon said he’s seen evidence of “the criminal element” at some dispensaries, and that isn’t likely to totally go away no matter how the law changes, but he said he believes regulation, and making marijuana legally available to those who need it, remove much of the crime related to pot on the streets, he said.

“This is one of those bells you can’t unring.  Until they get some regulations in place to weed out the people who just want to be able to get marijuana, people will abuse the law,” he said.

“On the other hand, I have a son in college and I’d rather have my son smoking pot than drinking, or smoking ecstasy or doing other drugs.

“I’m self-employed in the construction industry, I have a family and a good life and marijuana has been a constant.  I’ve never drank or done any other drugs.  I have friends who say, ‘When I drink beer, I get in fights.  When I smoke pot, I make friends.’ Most people who smoke marijuana are really good people.” 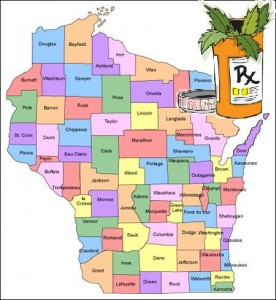