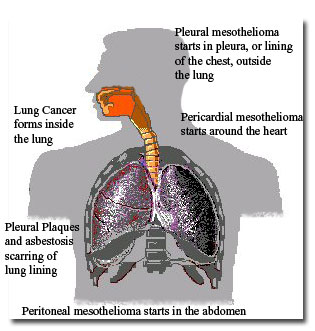 Mesothelioma is a medical condition very close to my heart, not because I or anybody I love is unlucky enough to suffer from it but because I spent five years of my life writing about it. During those years, even at such a distance, I was appalled by how devastating this lethal lung cancer can be.


Mesothelioma is a type of cancer and one of a group of cancers that do not respond to traditional cancer treatments, such as chemotherapy. Most of our internal organs are covered with a protective lining known as the mesothelium – cancer cells in any part of this lining is known as mesothelioma. The most well known form of this disease is pleural mesothelioma, which is cancer of the lining covering the lungs. However, Mesothelioma can also occur in the abdomen, and this variant of the disease is known as peritoneal mesothelioma.


Seventy to eighty percent of those diagnosed with mesothelioma have had some contact with cancer, usually many years prior to the onset of the disease and 10% of people who have had prolonged contact with asbestos will go on to develop mesothelioma. Given, that up until the seventies, many school ceilings and walls were lined with asbestos because of its fire retardant properties, it’s easy to see why diagnosis of this type of cancer is on the increase. People who worked in the following industries during the early to mid-twentieth century are those most at risk:


The troubling aspect of this disease is that it takes 15 to 40 years after exposure to develop; the number of diagnoses is expected to peak in 2020 before the level starts to fall off.


How can Medical Marijuana help Mesothelioma?


Well, let’s get this said up-front: as far as we know medical marijuana will not cure mesothelioma. Nevertheless, we know of at least one study looking at cannabis for chemotherapy patients (Harvard University) that showed THC, the active ingredient in cannabis, slashed tumor growth in common lung cancer by 50% and also reduced the spread of the cancer.


Mesothelioma is not a common cancer, nonetheless, it is likely to be treated using common medications – because there is little else that can currently be done, other than surgery. This means that the mesothelioma is almost certain to undergo chemotherapy and/or radiation treatment.


The well-respected British Medical Journal published a study, back in 2001, which proved cannabis was better than the commonly used anti-emetics for the treatment of nausea:


To see the rather nasty side-effects of some of these drugs, just Google them!


This same piece of Harvard research highlighted the fact that some side effects of marijuana are positively helpful when dealing with the effects of chemotherapy, such as sedation or drowsiness. Although it does point out that some patients may have problems with some of the other side effects, such as depression.


My personal belief is that these effects can be limited or avoided by careful choice of marijuana strain.


The most telling point of the article, for me at least, was the following:


‘Many patients have a strong preference for cannabinoids.’