By adminDecember 12, 2013Benefits of Medical Marijuana, Medical Use of Marijuana, Treat Medical Conditions 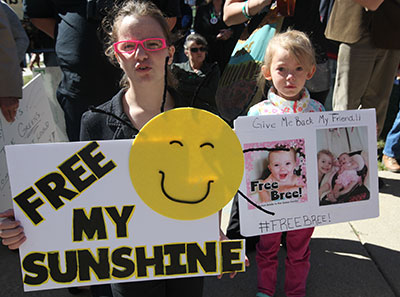 For the sake of this story, let’s say you are a medical marijuana patient. You have been diagnosed with a condition in your early thirties after you have lived a fulfilling life, doing exactly what you wanted to do. By some weird coincidence, your partner has been diagnosed with a serious condition as well. To be even more precise, you have been diagnosed with multiple sclerosis while your partner has just discovered he has epilepsy. Oh, and by the way, you have a baby, which makes things even more complicated. That is exactly what happened to a couple from Michigan. However, when life gives you lemons, you try to make the best out of it. As soon as they discovered their lives are about to change, they started getting interested in medical marijuana, which actually makes their lives much easier. At the very least, they can function normally and take care of their baby. Or, they could take care of their baby up until recently.

Mid-September this year, the pair stood in their house as the social services took away their baby girl. You guessed it; they were accused of exposing their baby to medical marijuana. One would have to assume that they smoked marijuana while being in the same room as the baby. Was there any evidence to this? Did someone actually witness this and report it to the police? How did that assumption turn into an accusation exactly? We’ll never know for sure but our guess is that some of the neighbors’ just didn’t feel it was right for a medical marijuana patient to be raising their children in a “marijuana infested environment”.

Luckily, the amount of people that showed their support for the parents significantly outweighed a couple of pesky neighbors’ and soon, a small campaign “Free Baby Bree” was born. The campaign exploded on Facebook, Planet Green Trees Radio and at various rallies and fundraisers. The interest in the case was huge; so huge that four lawyers volunteered to work on the case. After all, this is a precedent, one that could affect similar cases in the decades to come. Because, let’s face it, a lot of parents are using medical marijuana. Does that mean we should take their kids away from them? Hell no.

Both parents are licensed by the state to obtain marijuana for medical purposes but, as we mentioned earlier, some people disagree with their decision to lead a normal life. Richard Garcia, the probate Judge of Ingham County has expressed doubts about the actions of social services questioning their evidence and motives. That’s why he held a special hearing on Friday where it was ruled that Bree is to return home. Joy, wonder and excitement filled the room and Bree is now happily back with their parents who are thanking their lucky starts things turned out the way they did. Hopefully, this case will serve as an example in the years to come.