Should Medical Marijuana be Legal for Under-18’s? 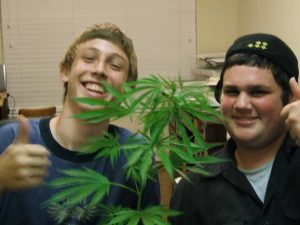 Quite a while ago now we asked if any of you had used marijuana as a treatment for insomnia and, as usual, we had loads of responses.  The one that touched us most, though, arrived fairly recently; with full consent of the writer, we reproduce it in full below:

Im 15 yrs old. I hav always had trouble getting to sleep, mainly because my mind doesnt stop at night, just like John said. So anyway for the last couple of months, which is when it has been worse than ever in my life, i will usually go on about one hour of sleep during a weekday.

As a matter of fact right now it is 5:40 am and i’m supposed to wake up for school in 20 minutes. Weed seems to be the only thing that helps for me, especially since I hate taking pills. The ONLY reason weed sometimes doesnt help is because I will stay up on purpose because I feel like I am wasting money if I just go right to sleep.

But anyway i have to tell about the time last week when i was really couldnt sleep at all no matter what i did. That day after school I went to the park with some friends. We smoked with a bong and then I went home. When I got home I ate a bowl of rice krispies and went to take a nap. I was hoping to sleep for maybe an hour, I slept for 13 hours, nuff said.

There can’t be many of us who haven’t experienced the soul-exhausting search for sleep our correspondent describes, growing every more panicky because the sky is rapidly getting lighter and we’re too worn out to face another day.  Hands up – I’ve been so pooped that I’ve tried all sorts in an effort to get some shut eye; codeine, anti-histamine, whatever I can lay my hands on.  But it’s a long time since I was fifteen and I don’t know how I would have coped with insomnia at that tender age.

So, the question for today is – should medical marijuana be legal for under 18’s?

A recent article in the New York Times debated this very topic.  Citing weed names such as Kryptonite, Voodoo Daddy and Train Wreck as well as cannabis cookies arrayed below a sign saying, “Keep Out of Reach of Your Mother” the article contends that marijuana is aimed at adolescents now anyway.

We have to go to California for some facts:

Then, we hear from Stephen Hinshaw, chairman of the psychology department at the University of California:

“How many ways can one say ‘one of the worst ideas of all time?’ He cited studies showing that THC, the active ingredient in cannabis, disrupts attention, memory and concentration — functions already compromised in people with the attention-deficit disorder.

So we want to hear from you about this issue, which can only continue to grow in importance as more states become legal.  As ever, your responses are as anonymous as you want them to be.