By adminJuly 2, 2015Benefits of Medical Marijuana, Medical Use of Marijuana, Treat Medical Conditions 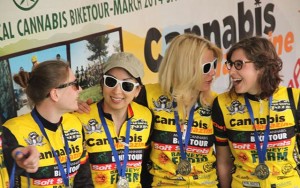 Europe’s biggest cannabis sporting event was huge this year! On June 11th, the team kicked off their amazing tour from Maastricht and passed through Belgium, Holland and Germany over the course of three days. On June 14th, they arrived as a group at the Cannabis Liberation Day in Amsterdam. This year’s sponsors were eager to give big money to the group – they have raised 200,000 Euros from more than generous sponsors! The team behind the Medical Cannabis Tour hopes to raise more money through a crowdfunding campaign that launched on June 11, the same day their cycling adventure begun. Riders from all over the world took part in this huge event. The aim of Medical Cannabis Bike Tour was to raise enough money that would enable scientists to begin comprehensive clinical trials this fall, testing cannabinoids on brain cancer patients as first line therapy.

Cycling around the Europe for medical marijuana research

Every year, the Tour sets on a journey over the period of three days to cycle through 420km of breathtaking European scenery. So jealous we couldn’t be there this year! The organizers’ goal is to raise money that would enable independent clinical research by a special team of scientists who are researching the medical qualities of cannabis, trying to identify the exact role and effect of each of the cannabinoids. So far, we know that various strains have effects on some conditions and on other ones – none. The community gathered around medical cannabis is eagerly awaiting more findings, which will benefit both patients and physicians. So far, Israel has been a shining example of how to approach the matter – the chemistry behind cannabis is still unknown, but there is one man in Israel who decided to debunk it. His name is Raphael Mechoulam, and is known within the medical cannabis community as “the grandfather of cannabis research.”

That is the question people behind the Medical Cannabis Tour ask themselves each year and the reason behind their efforts around organization of this cycling event. They started three years ago in Madrid with their first bike tour after hearing the story about the research of the scientists at the Complutense University, who are one of the world leaders in their field, and group decided to make their job a fund raising cause. “The foundations of the research are based on the effect that cannabinoids have been shown to have on Glioma Initiating Cells (GICS) in the lab,” MCBT’s crowdfunding page states. “GICs fuel tumor growth and Dr Velasco and his team in Madrid have already completed research that suggests that cannabinoids (a component of cannabis) can help eliminate GICS, and that’s not all that’s exciting about this research.” The study will start in September 2015 with 30 -40 patients in 4-6 Spanish hospitals. So, if you want to help this group raise money for the Madrid scientists to conduct clinical studies using cannabinoids and other anti cancer agents as a first line therapy – go visit their page and enter your pledge amount. It’s an amazing cause to support!