Could Medical Marijuana Work For Animals?

By adminAugust 27, 2013Benefits of Medical Marijuana, Medical Use of Marijuana, Treat Medical Conditions 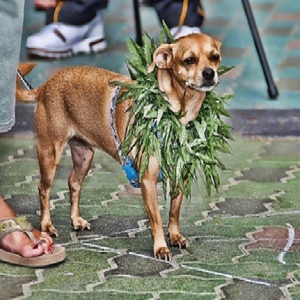 I recently became a dog owner and it changed my life completely. I now have a new routine to stick to and I have to take care of this little being every day for the rest of his life. It’s not really that hard, it’s not like it’s a human baby or something, right? Well, it depends. There’s a generational gap between what people think dogs should be treated and how dogs really should be treated. Older generations mostly believe dogs should be chained to a fence and fed bones and leftovers from your meals. Younger people have a new approach to treating dogs. They train them at least one hour a day and take them walking three times a day. The food I give my dog is nowhere near human leftover food. Instead, I provide my dog with the most nutritional food out there. It’s a small dog so I don’t have to spend a lot of money in terms of food and it’s a housedog so he doesn’t really need to run for 4 hours every day.

As time goes on, you really start to care for that animal in ways you never thought you would. He got a thorn stuck up his paw a couple of days ago and he started limping all over the place. I took him to the vet where I saw dogs in much more serious conditions than his. Then I started wondering how I could help my pup if he was in really bad shape where traditional medicine simply wouldn’t work anymore. Would I give him medical cannabis? Because, every time we go on a long car trip together, I break off a sleeping pill and put it in his food so he doesn’t get carsick. Even dog’s sleeping pills have the exact same properties as traditional medicine intended for humans. My question is, if we can apply store bought medicine to animals, can we provide them with medical marijuana in order to experience the same medicinal effect as humans do? Could marijuana relieve pain even in dogs?

The answer is: yes it can. The most recent example is the one of a sick and aging bulldog from California. He’s 12 years old and for the last 2 years he has been able to continue with his everyday life solely due to medical marijuana the owner has been feeding him. Before that he just felt useless, didn’t do much, kept vomiting all the time and wasn’t really in the mood for anything. Today, he feels much better, his fur is softer and he can play again.

Doug Kramer is a veterinarian from California and he is leading the battle to make marijuana an animal friendly drug. At one point he simply got tired of euthanizing pets. He felt like he was letting them down somehow. He used to be an owner of a Siberian husky. Unfortunately, the husky suffered from tumors and after surgery, weed helped him alleviate most of the pain. The dog did die shortly after but Kramer believes that weed made the transition a whole lot easier. He is now speaking out on the issue and he’s hoping that years of practice will introduce medical marijuana to dogs as well. A lot of people have expressed support for Dr. Kramer’s but are not willing to go public yet. We’ll keep you updated on future developments.