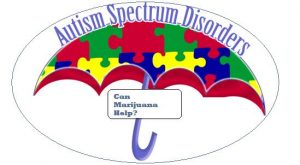 At the risk of being controversial, it seems like autism might be the new black when it comes to the number of children being diagnosed with the condition. Not that I’m not disputing the rise of true autism in our younger generation, in fact, my own son lives his life on the autistic spectrum with Asperger’s Syndrome (AS).

There have been numerous anecdotal reports of medical marijuana being used to ease some of the problems that go with the autistic disorders – and there have probably been an equal number of anecdotes against the use of cannabis in such circumstances.

For what it’s worth, my own son became rather more angry and aggressive with cannabis use.  However, he was using it for recreational purposes rather than as a medicine and it is entirely possible that, if he had been more selective in terms of marijuana strains* and purity, the effects might have been dramatically different.

*We are currently putting together a comprehensive guide to marijuana strains/types and the conditions they help.

Autism is a lifelong developmental disability and shows itself in various ways – not everybody with autism will show the same characteristics.  For this reason there is now a tendency to refer to people with this condition as suffering from an autism spectrum disorder (ASD). However, all people with an ASD share three main areas of difficulty – a triad of impairments:

Many ASD sufferers live relatively normal daily lives – and there is no ‘autistic’ look (despite what you may have read in the past).  Of course, in many respects this is ‘A Good Thing,’ however, it also means that an autistic person’s behaviour can be perceived as just rude or appalling, rather than be recognised as a sign of disorder.

The triad of impairments can lead to major frustration developing in an autistic child or adult, which can then turn to anger and aggressiveness.  It is these situations that it is thought medical marijuana might help.

Hopefully, as a child reaches adulthood, some coping mechanisms for these frustrations will have been learned – although this is not always the case; much depends on the age of diagnosis.

However, it takes a fair bit of maturity to employ coping mechanisms and children on the autistic spectrum have, by definition, not yet got to that stage.  And here lies the controversy – a number of mothers have ‘confessed’ to medicating their autistic children with marijuana and the jury is out on the morality of their actions.

The video below shows the remarkable effect marijuana has had on the life and health of one autistic youngster.