Asthma spells. Cannabis could be the new therapy

By adminMarch 29, 2016Benefits of Medical Marijuana, Medical Use of Marijuana, Treat Medical Conditions 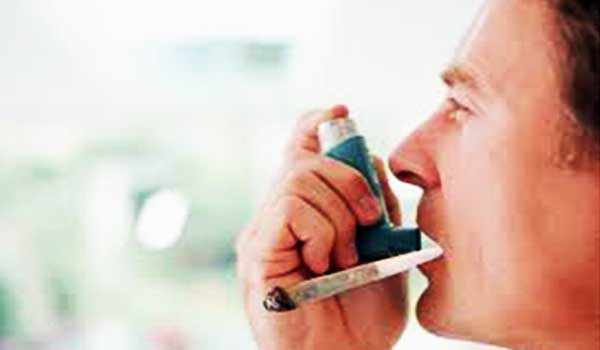 Asthma, commonly considered to have a generic background is believed to be triggered by bacterial or viral infections in early childhood. Due to its effect on the immune system, it leaves the patient susceptible to allergies and irritations.

Asthma narrows a person’s airways and makes them swell in case of an attack, consequently leading to shortness of breath, wheezing, coughing and a likely shortage of oxygen supply to the lungs. It can be greatly dangerous if not timely and appropriately managed. To date, there has not been a permanent cure for the illness, though all the available treatments can help curtail the impact of the attacks. Over 300million people die from asthma related complications yearly in the US.

In 2011 alone, 250000 deaths were recorded worldwide in relation to the vice. For the long part medical practitioners have often prescribed salbutamol, steroid and nebulizer inhalers to asthma patients. They have for all this time served as appropriate “compassionate therapies”. However, they have not come alone but rather along with severe side effects which among others include, anxiety, high blood pressure and corticosteroids. So this is where cannabis comes in to offer a steroid free treatment.

Cannabis as an anti-inflammatory.

Much as asthma is globally known as an inflammatory disease, cannabis is a known anti-inflammatory. Research has proven that THC a salient component in cannabis is capable of dilating respiratory airways. At this point, you could be perturbed and thus be reminded of your doctor’s precaution about the dangers of smoking.

Evidence shows that cannabis may positively assist persons with asthma, even by smocking it. Whereas smocking of tobacco has a constricting effect on bronchial air passage ways, smocking cannabis ideally does the opposite by expanding them. It’s important however not to disregard the doctor’s prescription against smocking given its adverse effects on the health of the smockers lungs which among others may include tissue inflammation and impaired lung functioning.

Cannabis as a bronchial dilator

Dilating bronchioles which are constricted during an asthma attack plays a great role in restoring oxygen flow and thus ensures that there’s no drop in its circulation to the lungs. Research has indicated that cannabis can improve bronchial constriction both during an asthma attack and during normal circumstances irrespective of whether smocked or taken onto the body in an alternative way.

A study in 1973 indicated that unlike smocking tobacco, cannabis smocking caused a bronchial dilatory effect. It was later discovered that cannabis and salbutamol are equally effective in effecting bronchial dilation though the former (cannabis) archives maximal dilations more rapidly and that the dilations effects from smocking cannabis lasted longer.

Cannabis as an antibiotic

Several studies into the general effect of cannabis on asthma have showed subjective improvements in asthma related pains both by reducing pressure and constriction in the lungs and by acting directly on the nociceptors (pain sensing nerve cells) themselves.

Studies have further indicated that cannabinoids including THC, CBD and CBG have a broad spectrum bactericidal effect against common and infectious pathogens.Stepfococcus genus, a basic group of bacterial gents suspected to be behind asthma infections has been shown in several studies to succumb to bacterial effect of cannabinoids.

Noteworthy, cannabinoid receptors have been found in human lung tissue although in relatively low concentrations. These are thought to play a vital role in regulating inflammation

With THC and CBD increasingly showing their effect as anti-inflammatory, bronchial dilators and also as anti-biotic, it remains a larger open window of hope for asthma patients to use cannabis to recuperate overtime and not just to treat their attacks. Hopefully, growth in the acceptance and the use of medical cannabis will even lead to some more depth studies on how it can help patients breathe with much more ease.