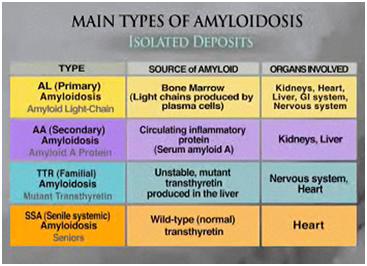 Okay, how often have you seen Amyloidosis on the list of conditions suitable for medical marijuana treatment and wondered what on earth it is? You are probably not alone; I’ll let you into a secret: I’m a health professional and I didn’t have a clue and had to look it up! So, in brief:

Amyloids are body-proteins that have folded in on themselves, making them insoluble. The fact that they don’t dissolve can lead to a build up of deposits in various organs, such as the heart, the kidneys, and the nerves. This accumulation interferes with the functioning of the organ. I imagine it as being a bit like a build up of calcium deposits in a kettle. A build up of amyloids is known as amyloidosis. With me so far? Good, because now it gets a little more complex: there are more than 20 proteins that may form amyloids, meaning that amyloidosis is not one disease but a whole collection.

There are three main types of amyloidosis:

The most common form of this very rare disease is primary amyloidosis, a disorder of blood plasma affecting the bone marrow; you may also see this disease referred to as:

The build-up of the amyloid protein primarily affects the heart, kidneys, lungs, skin, tongue, nerves, and intestines. It may also occur in association with multiple myeloma.

Secondary amyloidosis, also referred to as AA, occurs as a result of a pre-existing inflammatory condition or chronic infection – the most common pre-disposing disease is rheumatoid arthritis. Symptoms of AA may include protein in the urine, oedema, and extreme fatigue. Treatment will depend on the underlying disease, which must be brought under control if the amyloidosis is to be addressed.

Because the amyloid fibrils in AA Amyloidosis are deposited mainly in the liver, spleen and kidneys, the most common presentation is kidney failure. Complications in the digestive tract are frequent and present as chronic diarrhoea with bleeding, abdominal pain and poor absorption of nutrients.

Hereditary amyloidoses are rare, at less than 1 per 100,000 of the population. Treatments for these variants of amyloidosis are not advanced but, fortunately, the hereditary variants of the disease are slow progressing and mostly limited to the kidney.

Signs and Symptoms of Amyloidosis

Perhaps you haven’t noticed, but the conditions that are helped by medical marijuana tend to exhibit one or more of the following characteristics:

It has been known for a very long time that cannabis has anti-inflammatory properties and we now understand that it is the CBD content of the plant that imparts these characteristics. Plants high in CBD have been shown to be capable of reducing pain, inflammation, stomach cramps and nausea. And, as an added benefit, these high CBD strains of cannabis also reduce anxiety.

You may find the following medical marijuana strains helpful for symptom control in Amyloidosis:

The best way of ensuring you get exactly the right strain for your condition is, of course, to grow your own marijuana