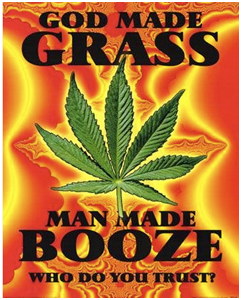 There have been numerous reports of marijuana being used to ‘cure’ alcohol abuse but, as any alcoholic would tell you, this is simply the substitution of one addiction with another.

BUT (I do like buts – it means that nobody knows everything!), according to information gleaned from HAMS: Harm Reduction for Alcohol, there is evidence to support these claims.

What might be more telling are patient reports when cannabis was discontinued:

Sadly, three patients reported that, when they stopped using cannabis in preparation for drug tests, they fell off the wagon completely.

In the UK, Dr B G Charlton advocates drug substitution as the only rational solution to the extremely rapid increases in binge drinking which are taking place in the United Kingdom today:

“Since hundreds of thousands of people in the UK and Ireland regularly get drunk during their leisure hours, it is clear that a lifestyle drug that induces a state of euphoric release is needed, and alcohol is currently the only legal and available intoxicating agent. Marijuana is probably a safer and less antisocial alternative to high-dose alcohol.7 There seems to be a broad consensus that marijuana intoxication is less medically harmful than high-dose alcohol bingeing, and (if hippies are any guide) intermittent marijuana usage largely avoids the social problems of aggression and violence typical of drunkenness. It would make sense for governments of Northern European countries to promote marijuana intoxication as a socially-preferable alternative to binge drinking.”