What is tardive dyskinesia?

How does a person get tardive dyskinesia?

Prolonged exposure to antipsychotic drugs is the primary reason why tardive dyskinesia occurs in a person, though some persons get it sooner than others. Primary risk factors include:

What are the symptoms of tardive dyskinesia?

Tardive dyskinesia is characterized by repetitive and involuntary movements of orofacial muscles, but can also include rapid movements of the arms, legs and trunk. Specific facial symptoms may include rapid eye blinking, tongue protrusion, lip smacking, pursing and puckering, or grimacing.

Is Medical Marijuana a valid treatment for Tardive Dyskinesia?

Tardive dyskinesia treatment is limited, but there have been studies that have determined medical marijuana to be an option. If medical marijuana can help ease the pain and suffering of a TD victim then medical marijuana should be considered a viable treatment option. If the disorder arises while a patient is still being treated with antipsychotic drugs, the medication will be adjusted to the lowest possible dose and may be discontinued if possible. Discontinuing medication occurs on a gradual basis, lowering the doses in small increments over time to avoid adverse reactions. Replacing the antipsychotic drug with another one helps some patients and some benzodiazepines, adrenergic antagonists or dopamine antagonists are also known to help tardive dyskinesia. Vitamin E has also shown to be beneficial in some patients.

What should be done if you notice tardive dyskinesia symptoms in yourself or a family member?

If experiencing symptoms while still taking antipsychotic drugs, you should first inform the doctor that is prescribing the medication. If the disorder develops after stopping antipsychotic drugs, it would be ideal to talk with the doctor that prescribed them or make an appointment with a neurologist. For more information please visit TardiveDyskinesia.com or call (800) 584-661. 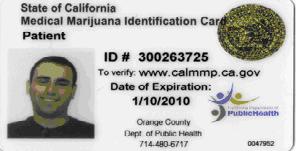 Get a Medical Marijuana Card in Los Angeles

Get a Medical Marijuana Card in Los Angeles