It has never been proven that marijuana has killed anyone, although smoking herbs can cause cancer. So if you like marijuana or use it for medical reasons, it is a good idea to consume marijuana in a healthy way. Therefore cooking with marijuana or using a vaporizer makes sense.

The following are the annual causes of death in the USA:

But marijuana still has a bad reputation with many people and alcohol is accepted in most societies. This may be due to the fact that most people refer to marijuana as a drug and alchol not as a drug.

The following is a true story, which demonstrates marijuana has a bad reputation:

Recently I was at a party in London and asked the host whether it was ok if I smoked a joint, she was happy for me to do so. After have a couple of drags I offered a girl a smoke of the spliff, she said marijuana was evil and therefore she did not want a toke.

It does not bother me if people choose not to smoke marijuana, but I was curious as to why she was so anti marijuana, so I asked her why she hated cannabis.

I was then surprised when she then told me that a friend of hers who used to smoke quite a bit of pot had died from smoking marijuana.

She explained that her female friend had died from a brain haemorrhage. She believed that THC had built up so much that a clot formed in her brain which subsdequently killed her. Unfortunately peope die from brain haemorrhages but it has nothing to do with smoking marijuana.

I explained to her that I owned MedicalMarijuanaBlog.com and that it has never been proven that anyone has died as a direct result of using marijuana. She was no prepared to have a debate, so I let it go as I did not want to upset her.

Why do you think marijuana has such a bad reputation? 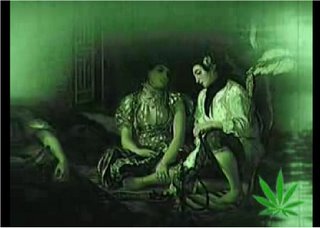